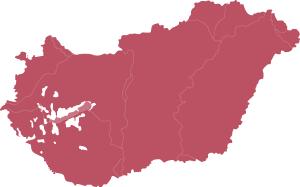 Personal opinion:
Sharp, hearty and confident. As adequate for the year, it is full-bodied, fruity with outstandingly nice colours and complex tannins. This wine was matured in an one-third filled Vicard wooden barrel. Masculine flavours, masculine wine.

Steak Budapest style - it was offered with that. I believe they are a perfect match, and I would not change that. However, if we choose it for a meal, it is a great friend of beef dishes.

About the Kékfrankos or “Blue Frankish” variety:

The Kékfrankos/Blue Frankish is a variety belonging to the wine-producing vines (Vitis vinifera) of the Vitaceae family. It is the most prevalent red grape vine variety in Hungary.
The Kékfrankos is common is Central Europe including Austria and Germany. It is grown in several wine regions of Hungary including Sopron, Villány, Hajós, Szekszárd and Eger. The Kékfrankos wines of various wine regions are of different character.
In the 1990's Kékfrankos was still an unhonoured variety that many would have liked to change to more fashionable varieties but its popularity has kept rising in the past years. Actually, it is now pointed out that Hungary's givens are unique for growing Kékfrankos. Kékfrankos is not only bottled on its own. It is the main ingredient of the Eger and Szekszárd Bull's Blood.
Its stock is of rapid growth. Its cluster is medium-sized, medium-packed with a short rachis, Its berries are medium, thick-skinned, slightly velveted. It yields well, can be harvested in September, and there is no rush with its harvest as it hardly rots. Kékfrankos grapes are typically used to make fruity dry red wines with acid accents, rich tannins and a spicy character.
Similar names: Blaufränkisch, Blauer Limberger or Lemberger, Limberger, Franconia, Frankovka, Frankovka modra, Moravka
The German name (Lemberger) refersto the dukedom Lemberg in today's Slovenia that used to be a part of the Austro-Hungarian Monarchy. According to a study Kékfrankos has more than 40 name varieties in Central and Easter Europe.

In the Badacsony area, vines were grown in Roman times, and Emperor Probus had sizeable plantings here. At the time of the settlement of the Magyars in Hungary they already knew about vines and wine. They appreciated areas capable of growing vine. A significant part of the wine region was taken over by the church in the 13th century. In the 18th-19th century the Badacsony vermouth gained a similar reputation to that of the Tokaj aszú in Europe.
During the reconstruction after the phylloxera epidemic, supporting walls were built to prevent soil erosion. New varieties also entered the area. The Szürkebarát was introduced from France by monks. Due to the special soil content it evolved into a typical local variety, the Szürkebarát, which botrytises in good years.
The variety grown in the biggest amount is Olaszrizling that is in better years ripened on the stock longer, and is used to make ice wine or late-harvest hand-selected Olaszrizling. Szürkebarát, Tramini, Sárga muskotály, Rajnai rizling and Chardonnay are also present on the larger lands.
Kéknyelű or " Blue Stem" used to be a characteristic wine of the region. It was significantly confined by the frost damage of the 1980's but is experiencing a revival today, and will be an emblematic wine of the Badacsony region again in the near future.
Badacsony wines are typically full-bodied, fiery, aromatic and mineralized. Traditional wine-making and maturation in wooden barrels are characteristic. Although reductive wine-making and other modern technologies are also spreading, they have not significantly changed the character of the region's wine, yet.