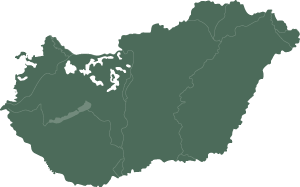 Almost weightless, airy, with an aroma characteristic of the Riesling and with a unique flavour. It is my personal favourite in the Mór wine region this year. An exciting, sexy, unisex wine.

It was presented with fried fish in bacon rings - it was an unmatchable dish. But I can imagine it with any fish dish.

About the Olaszrizling or “Italian Riesling” variety:

Olaszrizling is a variety of Italian or French origin belonging to the wine-producing variety (Vitis vinifera) of the family Vitaceae, and it is one of the most common white wine grape in Hungary. It arrived in Hungary from France from the middle of the 19th century. In place of those vines destroyed in the big phylloxera epidemic, new ones were planted. At its best production sites on the Szent György Hill and Csopak its yields are already much better than in its original homeland. Its stock is medium or weak, its canes are bushy and thin. Its cluster is small to medium-sized (with an average weight of 90-140g), packed, cylindrical and often has a side cluster. Its berries are small, yellow, round, barely velveted, thin-skinned. Its flesh is soft, juicy and neutral in taste. The taste of its wine often resembles to that of a bitter almond. It has a slight reseda aroma, its acids are gentle but their quantity depends on the production site. In northern Transdanubia, for example, the acids are the most gentle in Csopak, with the acidic character strengthening towards Badacsony and Balatonederics, and the strongest on the Somló. Within one site it is more acidic on the northern parts of the hills and more gentle on the southern parts. It can be harvested in the first half of October. It ripens late therefore it favours warmer spots, southern hills. Its yield is abundant, and it is a variety of excellent quality. Its harvest is of almost constant quality but it is sometimes affected by rotting and vine-mildew. Its overripe grapes are used to make special quality wines. Its unique characteristic is its great demand for magnesium; without that it may have deficiency diseases. A significant part of the magnesium gets into the fruit and from there into the wine so its wine is curative for cramps, etc. In Hungary the wine of the Olaszrizling grown on the basalt of the Badacsony wine region contains the most magnesium. In Hungary we find extensive Olaszrizling plantations in the Badacsony, Csopak-Paloznak, Eger wine regions; it is practically grown in the entire country except for Tokaj-hegyalja. It is widespread in Austria, especially in the southern and south-eastern parts of Styria, Burgenland, and in Weinviertel, where they make sparkling wine from it. In the Lake Fertő area they make noble rot dessert wine from the Italian Riesling. It is also grown in Romania.

The past of the Mór wine region takes us back to historical times but our wine law lists the first and second class vineyard cadastre border parts of Mór, Pusztavám, Söréd, Csókakő, Zámoly and Csákberény as parts of the wine region from 1996. In the life of the settlements vine-growing and wine-making played a definite part in the past.

The Mór wine region is one of the smallest in size among the 22 wine regions in Hungary but it belongs to the more famous ones.
The wine region is located on about 730 hectares in the valley of Vértes and Bakony in the boundaries of Mór, Pusztavám, Söréd, Csókakő, Zámoly and Csákberény settlements. Its climate is continental. Its topsoil consists of loess brown forest soil, clay, limestone and dolomite.
In the case of exceptionally good weather aszú wine can be made from shrunken berries that is a match for the Tokaj aszú both in aroma and quality. "The Mór wine is chalky, he who drinks it is brainy" - the saying goes even though the lime content of Mór wines is no higher than that of wines in other Hungarian wine regions. The Mór wines owe their masculinity to their high acid content. This, however, does not cause a headache, or a hangover, when consumed with moderation - unlike other wines with high carbonate content.